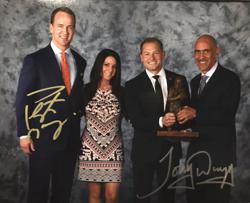 Are you crazy about college football? Does real life have a nasty habit of getting in the way of you keeping up to date with all the scores, games, stats, punditry and all the other things you love?

Well, you're not alone. Many college football fans find that their lives, jobs, and responsibilities conspire to prevent them from sitting in front of the TV all day and watching the game they love.

The good news is that there is a solution! Podcasts are becoming increasingly popular with sports fans as they allow them to keep up to date with all the latest news and scores while on the move. In this article, we’ll be giving you the rundown of five of the best college football podcasts you can subscribe to.

The Solid Verbal is a show hosted by Ty Hildenbrandt and Dan Rubenstein and the pair have been talking about their love of football on the air for over a decade now. The show comes out twice a week, on Sundays and Wednesdays during the football season and is a two hour listen.

If you want your football coverage to be deadly serious, this might not be the show for you, as the guys tend to mix in the goofball humor and the wacky sound effects of morning show radio DJs.

However, if you like your college football with a little fun on the side then The Solid Verbal is an excellent choice to keep you up to date with the game.

Landry Football is a podcast hosted by Chris Landry, a man with an extensive knowledge of college football.

In his time, he has been a former scout, former coach, and former front-office admin, which has given him a massive stock of footballing experience and a huge number of contacts in the college football world that he can bring on as guests.

Landry Football is an excellent podcast if you are looking for detail and analysis backed up by serious experience. Chris Landry isnt going to play whacky sound effects at you, but you will get solid coverage and informative breakdowns.

CFB Country is run by Josh Parcell, a former staff member for ESPN, Fox Sports 1, and writer for Outkick the Coverage. He also runs his own website, over at cfbcountry.com which is a must for fans of college football.

Using his extensive college football knowledge, Josh managed a 70% winning percentage picking against the spread in 2017, so when he gives you his take on college football game odds, you can rest assured he knows what he's talking about!

For those who want to go further and get immersed into the betting experience, different companies like FOX Bet deliver insightful picks and offer tons of wagering promotions from their exclusive roster of experts. So it is just a matter of getting the information from every possible source and apply it in order to become an expert.

Podcast Ain’t Played Nobody is helmed by Bill Connelly, the man who invented the S&P+ Ratings, and Steven Godfrey, who is both a writer and reporter at SBNation.com. These two get together a few times over the course of week, while the season is running, and provide an insightful and interesting podcast.

The Sunday show is always devoted to analyzing the stats produced by the games from the weekend before and its a great listen for people who love in-depth sports analysis.

The Shutdown Fullcast is basically the Last Podcast on the Left of football shows. If you want anything close to serious football analysis then this is probably not the show for you.

However, if you are looking to cut the seriousness of shows like Landry Football or Podcast Ain’t Played Nobody with a bit of lighthearted fun and banter, the definitely give the Shutdown Fullcast a try.

The Shutdown Fullcast crew, Ryan Nanni, Spencer Hall, and Jason Kirk, don’t have much of a filter between then and are happy to give you direct opinions on everything from fish tanks built into stadium walls to their views on Antonio Brown.

They guys have their fair share of football knowledge, coming from SBNation.com and EDSBS.com, but the show is as much about jokes as it is about football.