Osseo RB Bridge Tusler: "I want to be a Gopher"

Tusler is one of the top two-sport athletes in the state. 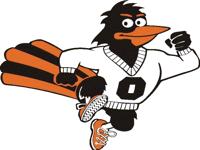