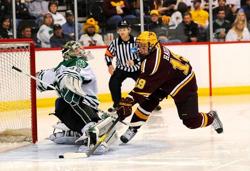 Only the second Gopher Men's Hockey player (Thomas Vanek 2002-04) ever to come from outside of North America, Erik Haula, currently leads the Gophers with 42 points on 15 goals and 27 assists, despite playing in three fewer games than a majority of his teammates. He also has a +17 +/- rating. This should come as no surprise, as he led the team in points last season with 49 on 20 goals and 29 assists as a Sophomore. Said Head Coach Don Lucia of the Junior from Pori, Finland "I think he's a more confident player now. He's shooting more. Playing with two older guys his Freshman year, he was more concerned with getting them the puck. You have to have that shooters mentality, and he was deferring to the others way too much".

From 2006 to 2008, Haula played for Porin Ässät in Finland, which translates to the "Pori Aces". Their biggest rival is "Lukko" from the nearby city of Rauma. A Friday night game between Porin Ässät and Rauman Lukko at Pori's Isonmäki Arena easily matches the intensity of any game between the Gophers and a North Dakota or Wisconsin. He came to Shattuck-St. Mary's in Faribault, Minnesota for the 2008-09 season, where he first caught the eye of the Gopher's coaching staff. After that, he went on to play a season in the USHL for the Omaha Lancers before coming to the U of M prior to the 2010-11 season. During his stint in the USHL, he made quite an impression, making the All-Rookie team, and being named to the USHL All-Star team.

Internationally, Erik has represented Finland at the 2008 World U-17 Hockey Challenge, the 2009 (Finland won Bronze) & 2010 Under-18 World Junior Championships, and the 2011 World Junior Championships, where he had 4 Goals and 3 Assists in 7 games. Two of his four goals were shorthanded. But scoring has never been an issue for Haula, who was drafted 182nd overall by the Minnesota Wild at the 2009 NHL Draft. In his Gopher debut back in October 2010, he registered two assists against Massachusetts, and scored his first collegiate goal the next week against Minnesota State-Mankato.

Going with the assumption that Haula has been dying to talk to GopherHole, we finally sat down with him and got to know him a little better.

GH:  So, take us through the life of a hockey prospect? Coming out of Finland, was there any interest from the Gophers? How about other colleges?

EH:  "I came to Shattuck (St. Mary's) and got used to the lifestyle there. I got used to the school system, and the living. It was a boarding school, and it was really different. Then hockey started, and I really started to get into, and focus on that. Pretty early on colleges started talking to me, and coaches started coming to Shattuck. That's kind of how it started. It's all about trying to manage yourself, and not thinking about that too much. You just have to believe that everything will work out as long as you keep playing and working hard"

GH:  Who on the Gophers staff recruited you?

EH:  "I was contacted by Mike Hastings, when he was here"

GH:  Don Lucia said that your game really started to come around when you stopped being so unselfish with the puck and started shooting. Would you say that's a pretty accurate assessment?

EH:  "Yeah, definitely. I used to be a pass first guy. I realized after my Freshman year that I need to shoot the puck more, get into the dirty areas, and have the mental aspect of wanting to score. I feel like that was good advice, and think it's helped me a lot"

GH:  What is the strength of your game?

EH:  "I would say the strength of my game is being an effective two way player, and creating chances"

GH:  What is an area you need to improve on?

EH:  "I don't think I have a real big weakness. Something that I do need to focus on, though, is playing physical and keeping my feet moving at all times"

GH:  Do you have any superstitions?

EH:  "Yeah, I have a few. When I put my gear on, I have to start from the left, always. Everything starts from the left. Socks, skates, pads, shin pads, everything. That's probably my biggest superstition. I also have to tape my sticks with my suit on, and go get into my warm-ups afterwards. I just keep the normal game day routines, like taping sticks, my sleeping routine, what time I get dressed, riding to the rink in the same seat of the car, and what time I come to the rink…. all that"

GH:  Any hazing or pranks that go on in the locker room?

EH:  "There's no hazing, really. There's some good pranks though, like 'leaners'"

EH:  "Yeah. You put water in a cup under somebody's helmet, so when the guy goes to put his helmet on, it spills all over him"

GH:  With several pro players practicing at Mariucci and Ridder Arena during the lockout, did you get to mingle with any of them?

EH:  "Well, (Keith) Ballard and those guys skated with us a lot. Mostly Ballard. He and Pauly (Paul) Martin skated with us. Just chatting with those guys here and there, and learning how they do things, was cool"

GH:  How about Mikael Granlund? Do you keep in touch with him?

EH:  "Yeah. I stay in touch with Granlund. We try to hang out here and there. Obviously the NHL schedule is really busy, so it's pretty hard to find time"

GH:  Speaking of Mikael, when are we going to see you on a stamp?

GH:  A postage stamp. You know, like the one Finland created with Granlund on it?

EH:  "Oh! Ha! I…I don't think they're gonna make one for me, so… We'll just stick to Granlund having one, and I'll keep buying those"

GH:  Keeping with the Finland theme, do you have a pretty tight relationship with Noora Räty (Gopher Women's Hockey Team Goalkeeper)?

EH:  "Nothing special, really. We just say "hi" when we see each other, and talk a little bit"

GH:  Being born and raised in Finland, your english is very gud! Any accent you have is nearly undetectable. How did you perfect your english?

EH:  "Well, we had Americans living at our house when my Dad used to coach American Football in Finland. Just talking with them, and spending time with them, kind of forced me to learn english. I was also going to school, and had been learning english since third grade. On top of that, my family traveled to America quite a bit. So being around the language so often probably helped me quite a bit. And, of course, once I actually got here I didn't really have an option but to consistently speak the language. I really developed my english the first year I was in Minnesota"

GH:  I'm sure your Finnish is probably pretty good too. Do you ever use Finnish, oh I don't know, in the heat of a game when you're not too happy with the officiating, or your opponent??

GH:  Kiitos for talking to us, Erik!