Q&A: Rivalry Trophy Puts the Axe, Floyd and Jug in the Hands and Homes of Die-Hard Gophers Fans 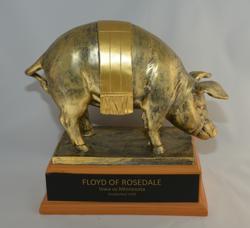 This replica Floyd of Rosedale is quickly becoming one of the best sellers at Rivalry Trophy. This 6lb Floyd is perfect for a home office, sports room or for tailgating!

One of the big story lines during this amazing 2014 Gophers football season is the crowded trophy case at Minnesota’s Bierman Football Complex. With the Governor’s Victory Bell already calling Minnesota home prior to the season, the Gophers stunned Michigan at the Big House to claim the Little Brown Jug, and later crushed Iowa to hoist the prestigious Floyd of Rosedale in front of a rocking TCF Bank Stadium. With each big trophy win, the University has allowed adoring fans to take pictures with these coveted trophies at special events all around the state.

While the Gophers have brought three of their four trophies to Dinkytown, the owners Rivalry Trophy are bringing fantastic replicas of these same rivalry trophies to the homes, offices and man-caves of die-hard college football fans!

Michigan State alumni and die-hard Spartan fans Brian McDonald and Patrick Kelly wanted a replica Paul Bunyan trophy when their beloved Sparty knocked off rival Michigan a few years back. And from there Rivalry Trophy was born!

Earlier this week the Associated Press named the Top 10 Rivalry Trophies in college football and the Gophers play for the top three – Axe, Floyd and Jug, respectively. And Gopher fans have been gobbling up these replicas all season long from Rivalry Trophy. With Black Friday and the holiday’s upcoming, Rivalry Trophy offers Gopher fans a discount when purchasing all three (the Governor’s Victory Bell is in development). In addition, Rivalry Trophy is now selling smaller Christmas ornaments of each replica!

GopherHole recently caught up with McDonald to learn more about how this unique concept was born and some great history about the amazing rivalry trophies that make college football so special.

GH: The Rivalry Trophy concept is such a fantastic idea. How did you come up with it?

BM: Back in 2008, when Michigan State beat Michigan for the first time in forever, my business partner called me up and told me he wanted to buy a Paul Bunyan Trophy for his basement. The only problem was that was impossible at the time. So we set out to make our own, with the idea that there were a bunch of Spartans and Wolverines that would like one for their basement, office, tailgate, etc.

GH: What has been the process to get the rights to each trophy? Do you work directly with the schools or do you have to go through the conferences or NCAA?

BM: The process is long. We started with a license through Michigan State, which eventually led to a Big Ten Conference license and now we've got licensing in process for many schools and conferences across the country. There are many steps to complete with regards to licensing, and before you know it you're meeting with attorneys, graphic designers, and exchanging emails with trademark representatives from a whole lot of schools. It's exciting but it's not easy.

GH: How did you determine which trophies you would make available to fans?

BM: As college football nuts we know which are the coolest, and the fact that so many reside in the Big Ten means we've seen and heard about these trophies for years. I still remember Rickey Foggie's Gopher upset in Ann Arbor back in 1986. So we look at tradition and we decide if a highest quality replica is even possible. Then we go to work.

GH: Did you physically visit each trophy to get the specs or is each done via picture?

BM: In most cases we visit the trophies personally. Even as a Spartan alum, I can't tell you how awesome it was to go to Schembechler Hall and hold The Little Brown Jug last year. Michigan (now retired) equipment manager Jon Falk couldn't have been more helpful. And the best part is that each Big Ten School has been equally as accommodating.

Even in cases where we haven't been able to physically handle the trophy, we've been very fortunate. Equipment managers and graduate assistants have been so responsive when we've asked for about 5000 pictures of each trophy, some from some of the strangest angles.

GH: Have you approached the schools of the winning trophies to see if they would want to purchase replicas for their players each year they win the rivalry game?

BM: We have begun to approach schools about purchasing our trophies after a big rivalry win. In fact, in the next couple of weeks we're going to be making a rather large delivery to a school that currently holds two rivalry trophies. To us this has been the most flattering part. When the guys directly involved with the programs are willing to purchase it validates the time we spend trying to get the minor details just right. We can't get all trophies 100%, but we're extremely proud of our products. And many of our trophies have been used as gifts for donors. We've even shipped our fair share as groomsmen gifts.

GH: The Associated Press recently ranked the Top 10 College Rivalry Trophies and the Gophers were 1, 2 and 3 with the Axe, Pig and Jug respectively. What makes each of these so unique and do you agree with these being some of the best?

BM: It's the history and stories behind them that make these trophies so great. Fielding Yost buying the jug because he was afraid the Gophers wouldn't supply clean drinking water? "The Slab of Bacon" gets lost so they decide in 1948 that Paul Bunyan's Axe is the way to go? The exchange of a real prized hog back in 1935? You can't beat these.

One of the most underrated trophies is the Illibuck, a turtle that goes to the winner of the Ohio State and Illinois game. Back in the day reps from each school used to smoke a peace pipe together at halftime.

And while there's no doubt that the 3 Gopher Trophies are all at the top, I'd say that the Old Oaken Bucket is one of my personal favorites. This year the Boilers and Hoosiers may not be playing for a warm holiday destination, but every person in the stands and watching will know what's at stake.

What I also love is that it's these trophies that make the Big Ten so great. Gopher fans work with Iowa, Wisconsin and Michigan fans. Indiana and Purdue fans share cubicles. Spartans and Wolverines are married. In many ways these games transcend national rankings because you've got to deal with these people every day. LOL

GH: What are the best-selling trophies that you make?

BM: The Paul Bunyan remains our #1 seller, though Floyd is picking up steam. Paul had a three year head start, so it's going to be a while before he's brought down.

GH: Is there any chance of adding the Governor's Victory Bell to your offering?

BM: The Governor's Victory Bell is in development. The fact that it's a bell that is expected to make sound is adding another variable, but we're pretty sure we'll get it right.

GH: With Black Friday and the holidays' coming up, any deals available for Gopher fans to fill their Gopher memorabilia rooms full of these awesome replicas?

BM: Yes! In the next couple of weeks we'll finally have the Brown Jugs ready to ship. We'll also have ornament size versions of all our rivalry trophies, and these are awesome! They're perfect on the Christmas tree, as a stocking stuffer or to covertly place on the desk of that downtrodden Hawkeye or Wolverine co-worker. They will sell at $18.  We'll continue with our Golden Gopher package, in addition we'll be doing a bunch of discounted/free shipping deals through the holidays.

The New Christmas Ornaments, which complement the larger replicas. 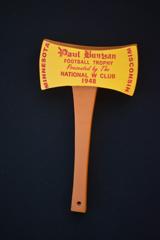 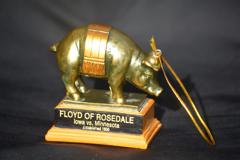 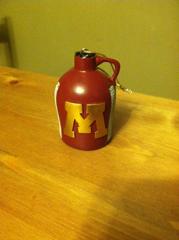