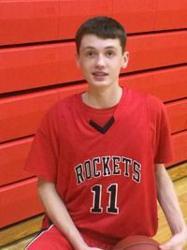 Matthew Hurt is a 6-6 eight grader who is already receiving interest from Minnesota and Northwestern.

Matthew Hurt, a 6-foot-6 eighth grade forward from Rochester (MN) John Marshall, is considered Minnesota's top players in the Class of 2019. Hurt averaged 18 points and eight rebounds per game as a seventh grader on the Rockets' "B" last season as he shot 60% from the field and 49% from three-point range. His strong play earned him a call-up to the varsity.

John Marshall finished 20-9 last season, losing to eventual state champion Lakeville North 96-61 in the Section 1AAAA championship game and they are off to a great start this year.

Hurt comes from a basketball family. His older brother, Michael, is one of the top juniors in the state and has a scholarship offer from Minnesota. His father, Richard, was a captain of the Rockets' 1988-89 team and his mother, Jenny, was a star for John Marshall, who graduated in 1990.

Gopher Hole caught up with Hurt after a recent game to learn the latest on his early recruitment and current season.

Gopher Hole: What is the latest on your recruitment right now? Are you starting to hear from some more schools since I know that it is so early being only in eighth grade?

Matthew Hurt: I am hearing from Minnesota and Northwestern. Those Midwest teams.
It is great having colleges look at me and I just to take my time and have fun with the recruitment.

Gopher Hole: How nice is it to finally get back on the court? I know that you are a competitive kid. How tough was it to not to be able to play, due to the spleen injury?

Matthew Hurt: It feels great to be with my team again because I love them and they are my brothers. I love playing every second with them on the court.

Gopher Hole: You had 17 and 16 points in your first two games coming back. How pleased are you with how well you have been playing?

Matthew Hurt: I am pleased with how I have been playing because I am getting efficient and my defense has really stepped up lately. I am happy that I am back on the court with my team.

Matthew Hurt: It feels great because he is always double or triple teamed and I am always kind of open and can get those easy baskets, so it is kind of fun playing with him. A lot of fun.